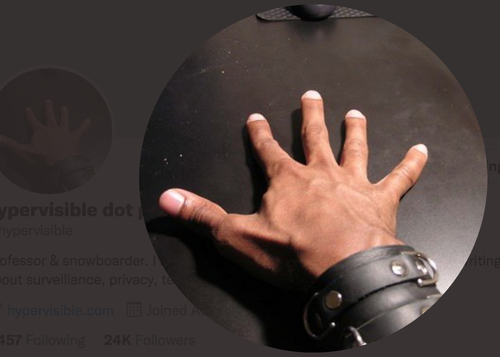 Did you know Ring cameras are tools of racism? Chris Gilliard may be able to convince you in less than 280 characters.

The Detroit community college composition professor and anti-surveillance activist you've likely never heard of has amassed a following of 24,000 on Twitter and gets a write up in today's Washington Post for "wryly skewering consumer tech launches and flagging the latest example of what he sees as blinkered techno-optimism or surveillance creep."

Among a growing chorus of critics taking on an industry that’s remolding the world in its image, Gilliard is not the most prominent or credentialed. Yet his outsider status is integral to a worldview that is finding an audience not only on social media but in the halls of academia, journalism and Washington.

In 2019, Gilliard testified before the House Financial Services Committee about how big data and algorithms in banking can reinforce historical discrimination. Last month, when President Biden signed the infrastructure bill, it included provisions intended to address digital redlining — the use of technology to enforce race and class divisions.

A groundswell of tech reform efforts has led to scant policy change at the federal level. What notable changes tech companies have enacted — such as Amazon suspending its sale of facial recognition technology to law enforcement — have been driven by pressure from the public and the companies’ own idealistic employees, often channeling ideas that have filtered down from academia through journalism via conduits like Gilliard’s Twitter account, among many others.

Gilliard, who is Black and largely faceless on the internet depite that his Twitter account handle is @hypervisible, was reportedly shaped by his experiences growing up in Detroit in the '70s and '80s — an era of aggressive policing that included Stop The Roberies Enjoy Safe Streets, or STRESS, the deadliest police unit in the department's history.

He reportedly has a PhD in rhetoric and composition from Purdue and teaches English at Macomb Community College in Shelby Township, Mich.

Gilliard's critiques, like those of other criminal-justice activists, are often prescient. Facial recognition, for example, though readily embraced by major companies and police departments, has, as predicted, led to the wrongful arrests of Black people — with the first two known cases right here in Detroit.

And Gilliard was right about Ring:

Gilliard began calling attention to Ring’s discriminatory potential soon after Amazon acquired it in 2018. He grew so preoccupied with the camera that he changed his Twitter name to “One Ring (Doorbell) to Surveil Them All,” a play on a line from “The Lord of the Rings.” He made himself available as an expert source to Vice, USA Today and the Associated Press, explaining how consumer surveillance tools such as Ring, along with social “neighborhood watch” apps such as Neighbors and Nextdoor, feed on people’s fears and amplify their biases.

“I think about what the effect is of law enforcement having easy access to cameras from everyone’s porch,” Gilliard said. “It makes nuisance crimes” — from stolen Amazon packages to an egged car — “available for escalation in a way that they weren’t previously.”

Gradually, Gilliard’s concerns were borne out. Stories began to emerge about Ring’s secret partnerships with police departments; its security vulnerabilities; the rampant racism on its neighborhood watch app, Neighbors; and how it trades on people’s suspicion of others who look like they “don’t belong.”