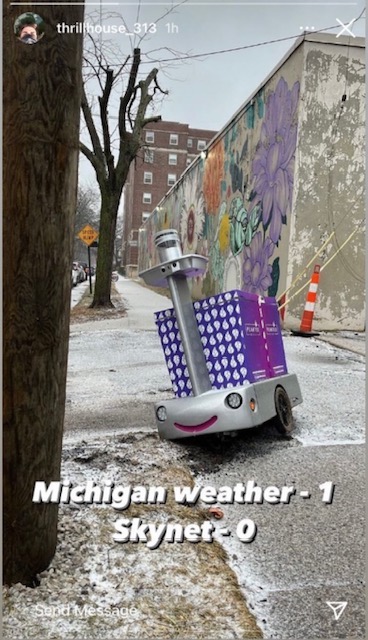 You go buddy! We believe in you! (Photo: Instagram)

The Planted Detroit robots are still going strong despite encountering some obstacles since their maiden voyage in Detroit's Islandview Monday.

The robots, for the uninitiated, are the delivery carts being piloted by the east side Detroit farm and salad purveyor in conjunction with a Silicon Valley company.

Robot deliveries began this week with drop off points on Jefferson and in Lafayette Park after a test run generated quite a bit of buzz. The response was mostly positive, though haters were salty the smiling cart was in a low-demand bike lane. (The company responded that city officials signed off on the 30-minute run.)

Anyway, the robots seem to be far from the city's smooth bike lanes now. Video sent to Deadline Detroit shows one navigating a bumpy driveway in West Village and hitting a utility pole. A separate photo of the incident captured the cart at a sideways tilt, as if about to topple.

The robot, however, emerged from the mishap unscathed.

It's unclear how well the others have fared and the status of deliveries scheduled for snowmaggedon, but we've reached out to Planted to learn more.

For details on how this came to pass, here's Crain's:

The Tortoise robots have been deployed in around a dozen places around the U.S., according to the company's founder Dmitry Shevelenko, who added that the robots are remote-controlled by humans, as opposed to autonomous.

The rollout in Detroit of the aptly-named Tortoise robots — which travel 4-8 mph, said Shevelenko — makes for something of a test with the city's snowy and icy conditions.

"I would say for sidewalk robotics, Michigan is kind of like the equivalent of the phrase: 'If you can make it in New York you can make it anywhere,'" he said. "So if you can operate in Detroit in the winter, you can go anywhere."

The pilot program runs 30 days. Find out how to get in on the action here.