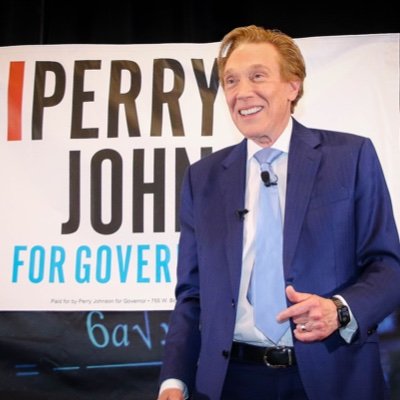 An old dating profile of Republican gubernatorial candidate Perry Johnson on Lovecity.com has surfaced in which he lists his age as 35 and is seeking women 21-35 years old. It appears he fibbed about his age.

It's unclear when his profile was  posted on the dating site, which started in 1996. Even if it was posted that year, Perry would have been about 48 years old, not 35.

"I started my business out of my home while in graduate school and now have over 1,000 people with offices in Tokyo, Monterrey, Melborne (sic) and throughout the U.S.," the Johnson profile says. "I enjoy dancing, sporting events, traveling, movies, theatre, scuba diving and most games.

"I am extremely social and love to be around people. I am a little over 6' tall, 185 pounds with an athletic build."

When asked by a Detroit News reporter if it is real, Perry, 74, tweets:

Life as pro-Trump Republican..48 hrs after saying going to Mar-a-Lago..reporter sends this. Hilarious! Looks like younger me! Site not familiar. I’m not a career politician. Real person, was likely on dating sites before married to my wife! Jeesh, desperate opposition. pic.twitter.com/FaCFFBdUuq

Johnson married his wife, Diane, in 2008, The News reports.

Trump has yet to endorse a gubernatorial candidate, but the prevailing thought among political observers is that the person will have to agree that the 2020 election was a fraud.