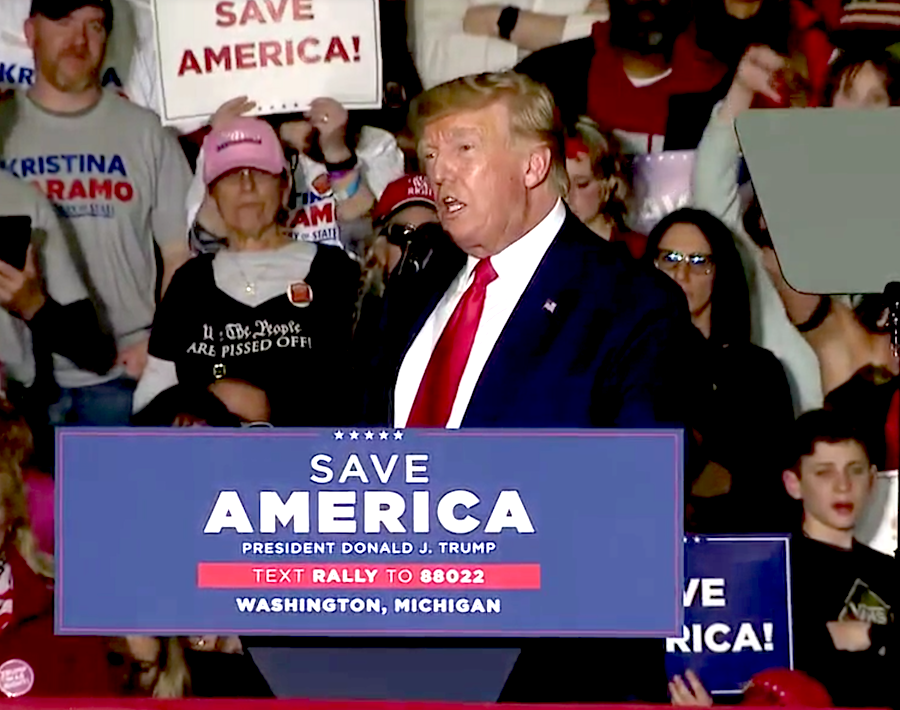 Modest to a fault, however, the former president shared fair credit with his followers. “And you were right, too,” he graciously conceded to their chants and cheers from a crowd of more than 5,000. “When I’m right, you’re right.”

Trump supposedly traveled north of Detroit to boost the candidacy of two Michigan Republicans: Matt DePerno for attorney general and Kristina Karamo for secretary of state. But he didn’t introduce them until almost halfway through a speech that lasted one hour and 45 minutes.

Instead, Trump seemed more interested in slandering opponents, bragging about his victory in 2016 over Hillary Clinton, whining about his defeat in 2020 to Joe Biden, insulting Detroit’s election management, lying about many things, making fun of an adversary’s last name and hinting strongly that he plans to run again in 2024.

“In 2024, we are going to take back our beautiful White House,” Trump said. “Would anybody here like to see me run?”

Earlier, he said: “I ran twice. We won twice. We may have to do it again.” 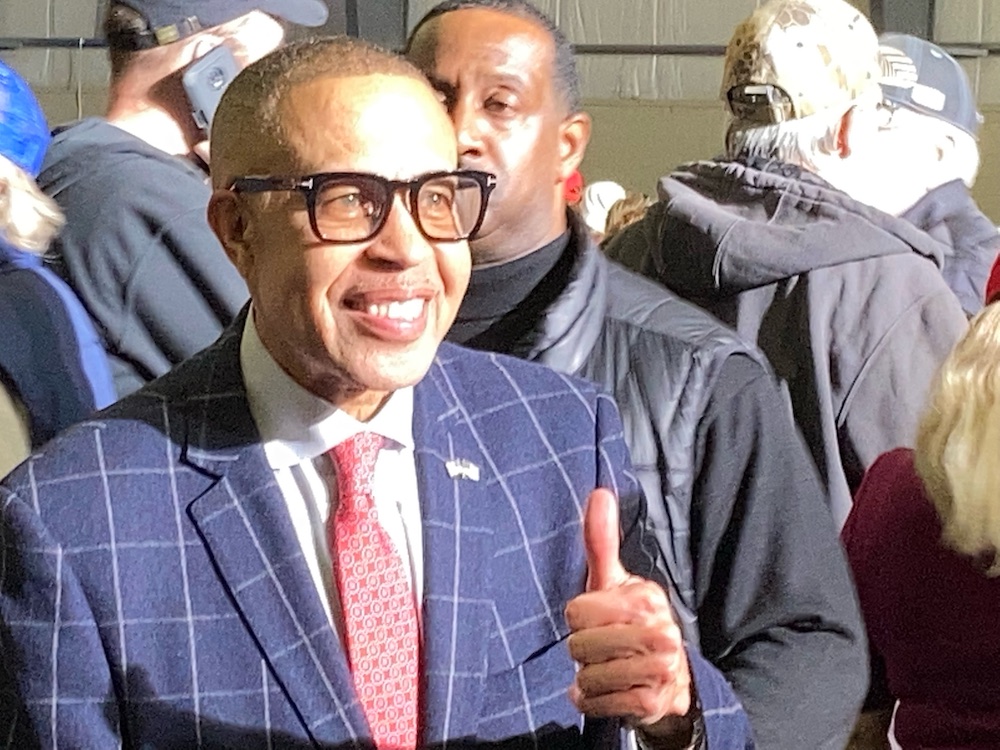 Notably missing from the stage were two major African-American Republican candidates: James Craig for governor and John James for House of Representatives.

Craig was in the building, shaking hands around the edges of the crowd, doing a couple television interviews. Detroit's past police chief wasn't invited backstage to meet Trump, as some party officials were.

“I’m here to support him,” Craig said of Trump. “I’d welcome an endorsement if it happens.”

James, according to a Trump campaign official, had “prior commitments” and could not attend. Trump has endorsed him, but didn’t mention him Saturday.

No F-Bombs – This Week

Although Trump lengthened his speaking time over that of other recent rallies, he cut down on his recent spews of profanity. Last week in Commerce, Ga., Trump said John Kerry and other environmentalists were “worried the ocean will rise one-hundredths of one per cent over the next 300 fucking years.”

Behind him that night, jaws dropped in that religious community. But on this visit, the only gasp Trump drew from the crowd was when he said tech mogul Mark Zuckerberg used to “kiss my ass” when visiting the White House. 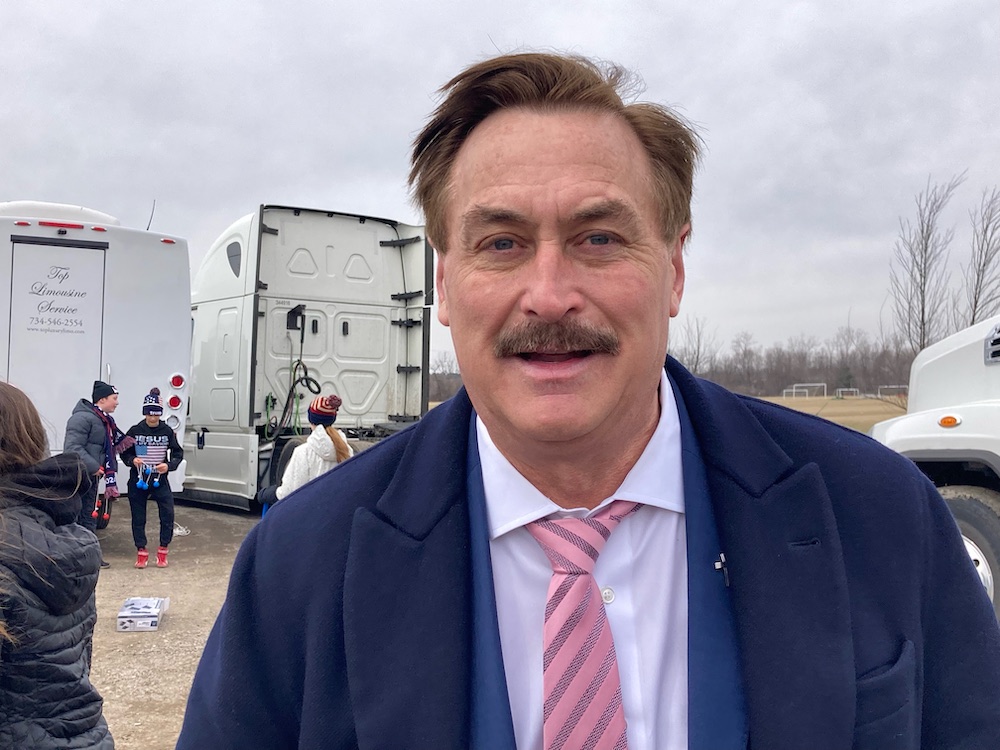 Oddly, Trump avoided several subjects that have put him in the spotlight in recent days.

For instance: He didn’t comment about how a federal judge wrote in a civil case in California that Trump probably committed at least two felonies for hindering a House investigation of a deadly lynch mob that over-ran the Capitol on Jan. 6, 2021 and tried to overturn an election and keep Trump on his throne.

Trump didn’t mention that the special House committee is investigating a gap of more than seven hours in the record of Trump’s phone calls to and from the White House after Trump incited the Jan. 6 mob with a fiery speech.

Although Trump briefly bragged about his diplomacy with Russian President Vladimir Putin, he didn’t elaborate on how he last week urged the war-mongering invader of Ukraine to dig up dirt on presidential son Hunter Biden. 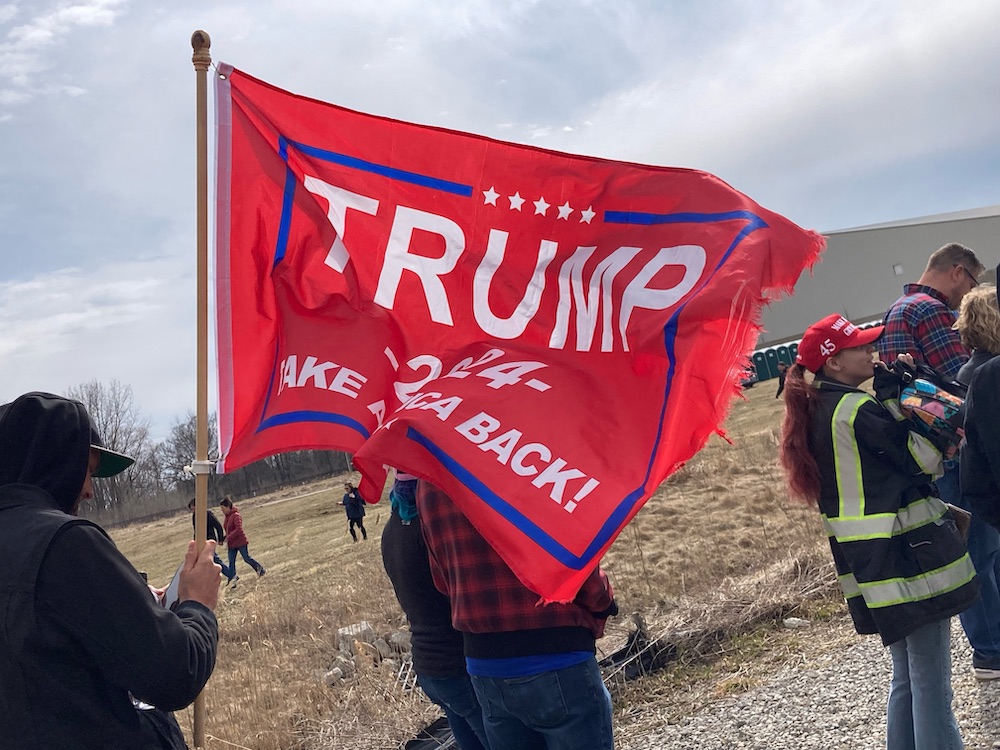 Heck, Trump didn’t even mention the hole-in-one he allegedly made at his Florida country club. Such a modest man!

And he certainly did look as if he spends lots of time on the golf course. His face was red and ruddy, instead of the old orange of his presidency, and his wet skin glistened with sweat under the bright lights. 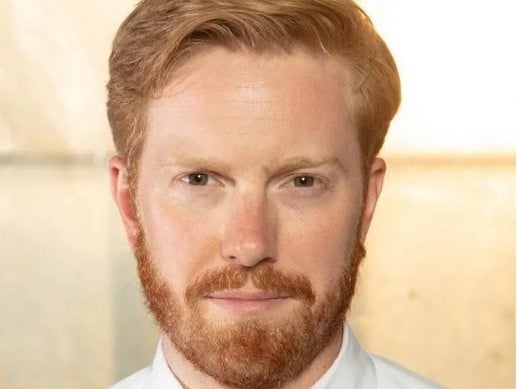 Perhaps Trump’s oddest digression was his relentless mocking of Peter Meijer, a Republican House member from the Grand Rapids area who voted to impeach Trump right after arriving in 2021.

Trump’s technique and tactics showed his tin ear for where he was.

Although Meijer is a first-term congressman, his family name is well-known in this state because it's on a chain of big stores that many people like. Most Michiganders know how to spell it and pronounce it. Trump seemed unaware of this as he ridiculed Meijer’s name:

"A guy who spells his name M-E-I-J-E-R but they pronounce it 'Meyer,'" says Trump as the Michigan rally crowd boos that spelling. "The hell kind of a spelling is that?" pic.twitter.com/9rlLKXob4r

Granted, this was late in the speech, when Trump was rambling and veering down side streets, as some weary members of the audience walked out the doors.

And this also was after Trump lied that Detroit “had more votes than voters,” and after he called the news media “corrupt” and “sleazebags” and after he drew cheers by blurting: “I’m for oil! I’m for God! I’m for guns!”

But of all his hostile words, the insults of Meijer were the lengthiest and most personal and they left a certain impression.

“Nobody knows him,” Trump said of Meijer. “He’s done nothing in Washington. I said `How do you pronounce his name? Is it `MAY-jer? MY-jer?’ They said it’s `MY-er.’ How the hell do you get `MY-er’ out of it?”

Perhaps, on the flight back to Florida Saturday night, a brave flunky tiptoed up to Trump and said: “Sir, the name `Meijer’ is Dutch and there are many Dutch people in western Michigan and they tend to vote Republican and conservative, but they probably don’t like it when you insult their culture in such a petty and juvenile way.”

And the wise aide also might have suggested: “It might not be smart to mock the last names of other people when your own last name – “Trump” – rhymes with so many other words, some of them funny.

Then again, maybe they just talked about golf.