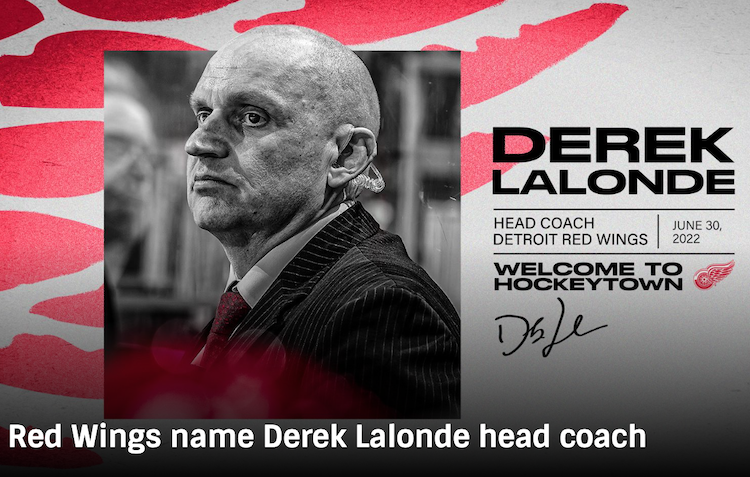 Derek Lalonde, an assistant coach with the Tampa Bay Lightning, has been named the Detroit Red Wings head coach, replacing Jeff Blashill, who was fired in April.

The Red Wings, with the new hire, hope to right the ship after failing to make the playoffs six seasons in a row.

"I'm very pleased to announce Derek as our new head coach," Detroit Red Wings executive vice president and general manager Steve Yzerman said in a statement. "He has proven himself as an excellent coach at every level and has spent the last four seasons in the National Hockey League as part of a very successful program in Tampa Bay. We feel he is ready to take the next step in his career as the head coach of the Detroit Red Wings."

Lalonde, 49, joins the organization after spending the last four seasons as an assistant coach with the Tampa Bay Lightning. During his tenure with the Lightning, Lalonde helped the team clinch four-straight postseason berths, highlighted by back-to-back Stanley Cup championships in 2019-20 and 2020-21.

In Lalonde's inaugural campaign behind an NHL bench in 2018-19, the Lightning earned their first Presidents' Trophy after setting a franchise record with 128 points while tying the NHL's single-season record of 62 wins previously set by the 1995-96 Red Wings. In all, Tampa Bay compiled a 192-77-10 regular-season record and a 46-26 postseason mark with Lalonde on its coaching staff. He was named an assistant coach by the Lightning on July 12, 2018, when Yzerman served as the team's vice president and general manager. Lalonde was previously a coach at Tampa Bay's development camp in 2013.

Before coming to the Lightning, he worked for two seasons as head coach of the American Hockey League's Iowa Wild from 2016-18, posting a 69-58-17-8 record with the Minnesota Wild's primary affiliate, RedWings