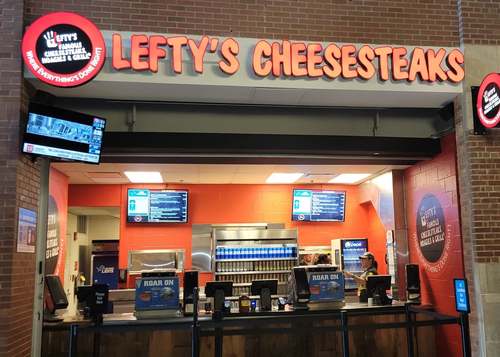 Cheesesteaks and Detroit don't exactly sound like they go together, but it's the cuisine hometown hero Barry Sanders has opted to trade in with his first local restaurant, Lefty's.

Sanders is co-owner of the new downtown location on Adams, across from Grand Circus Park and near Ford Field. He's also brand ambassador for the chain, which has outposts throughout metro Detroit.

The restaurant is commemorating its new co-owner with unique memorabilia, which include rare photos and an autographed jersey on the wall as well as highlights from Sanders' high school, college and professional career playing on a mounted television screen.

There is also a giant mural of his likeness with action photos of his Lions playing years as well as his No. 20.

During a Tuesday grand opening where the hall-of-famer was on hand signing autographs and posing for fan pics, Sanders told the network he felt it was important to be part of Detroit's "transformation."

"It's a common word that you hear and how far we've come in the last five to 10 years ... so, that's one of the main reasons why we are down here right in the middle of everything."